The Cone of Experience Myth and Promise of Multimodal Learning 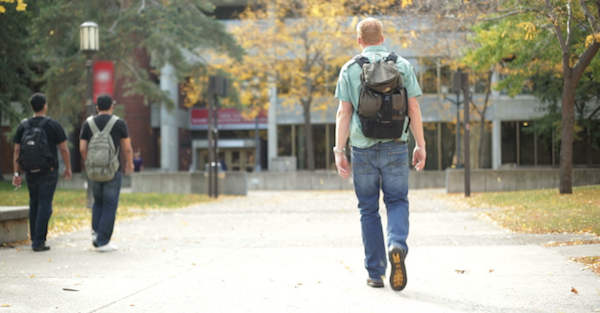 While most people have learned to guard themselves against believing everything they read on the internet, it is still all too common to see figures, charts, and quotes that are inaccurate or simply not true. We usually find misleading memes or articles on our own social media feeds, but copy and paste has made it easy for false ideas to appear anywhere. Even in industries made up of intelligent, critically minded people, such as education.

Many educators might have read or heard from others that research shows people only remember 10% of what we read, but can remember 90% of what we do. The idea is not new, and is often cited as evidence for a reform to traditional lecture-style education. As recently as last year, major American universities have been publishing versions of the following graphic, an intrepretation of Edgar Dale's Cone of Experience, asking educators to think about the impact of these numbers and how they should affect teaching methods: 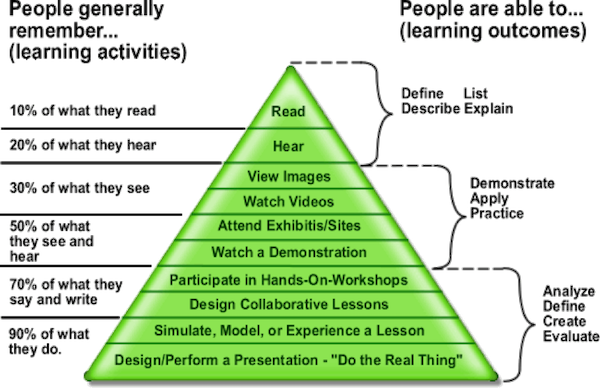 If these statistics were true, then the findings would have a major impact on the way we teach from elementary school all the way through higher education. It would also fully support numerous calls over the last half-century to move away from traditional lectures and reading assignments. But, are these statistics really true? And, if they are false, does that mean that new methods shouldn’t be embraced?

Statistic Detectives and the Cone of Experience

Within the last few years, researchers at Cisco took notice of the pervasiveness of these figures across the internet. If so many educational researchers were citing it as a framework for their ideas, it had to be true or at least come from a credible source, right? They quickly found that the most often cited source for the data is from Edgar Dale’s 1969 book Audiovisual Methods in Teaching. Dale’s book worked largely with the teaching of film in classrooms, advancing a theory that audiovisual materials were essential for teaching film appreciation and that more generally, reading and listening should account for a smaller portion of educational instruction as opposed to practical applications.

However, the Cisco team quickly found that Edgar Dale’s original diagram, which he dubbed the Cone of Experience, had no statistical data to back up his claims whatsoever. In fact, Dale wrote himself that the cone was:

“...merely a visual aid in explaining the interrelationships of the various types of audio-visual materials as well as their individual positions in the learning process… The cone device, then, is a visual metaphor of learning experiences, in which the various types of audio-visual materials are arranged in the order of increasing abstractness...and abstraction is not necessarily difficult.”

So, if Dale himself saw the visual aid as a visual metaphor without hard data, how have so many in the education field come to believe that students will only remember 10% of what they read? “An in-depth search of various citations produced countless dead ends,” writes Chris Fadel in his report for Cisco. “When authors were contacted directly, there was a tendency to insist, ‘I had the data once, but I don’t seem to have it in my files anymore.’”

Like true detectives, Fadel and his team didn’t give up, eventually tracing the data back to a WWII Colonel named Paul John Philips who included the statistics in reports for the Navy and the petroleum industry. Scholars who have also looked into the findings have found that data was most likely, “...a rounded-off generalization based on Philips’s experience…despite its widespread dissemination among scholars of all stripes, there is no more conclusive evidence of the data’s validity than that.”

Even if the data often used to simplify Edgar Dale’s cone of experience has been debunked, it still leaves us with an important question: Was he wrong in his base assumptions? Cisco’s researchers assert that a critical aspect to Dale’s cone of experience has been confirmed by more trustworthy studies into learning and brain functions, namely that different approaches can “influence the efficiency in learning.”

In the 1980s, Arizona State University professor David Hestenes published results of a study done on physics students. For the study he asked students across a broad range of lecture-style courses to answer questions about balls being dropped to the floor, and the results were shocking. “According to the results of the Force Concept Inventory test,” writes Emily Hanford for American Radio Works, “most people who take conventional lecture-based courses don’t end up with a good understanding of the fundamental concepts of physics.”

Hestenes has said that, “Students have to be active in developing their knowledge. They can’t passively assimilate it.” That idea would seem to support Edgar Dale’s fundamental idea of doing versus reading as being the most important for retention of information, and Hestenes actually had the data to prove it. Of course, understanding the basics of physics is in itself very different from analyzing literature, learning about history, or even studying film. Which is why researchers of the past decade have started to embrace new, more complex theories that work to address different methods, different subjects, and different students.

One Size Does Not Fit All: The Promise of Multimodal Learning

In 2007, professors Roxana Moreno and Richard Mayer set out to provide hard data to back up the idea that multimodal learning can constitute the best learning environment and lead to the optimal design principles for lesson planning. They define multimodal learning broadly as “environments that use two different modes to represent the content knowledge: verbal and nonverbal.” Specifically, they did not find that reading was “better” than lecturing or audiovisual representations, but instead lesson plans needed to employ all three while following five lesson design principles:

Moreno and Mayer’s findings showed that auditory, visual, and tactile experiences all played into helping memory better retain information, and that interactive environments using these five principles further produced the best retention rates. No matter the subject, school, or age group, teachers using technology to help students get adequate support, reflect on different representations of information, receive both positive and negative feedback, control the pace of their learning, and address their preconceived notions, produced students with higher retention rates.

Cisco’s research into the neuroscience behind memory building also supported these findings, writing in their conclusion:

“The percentages related to the cone of learning were a simplistic attempt to explain very complex phenomenon. The reality is that the most effective designs for learning adapt to include a variety of media, combinations of modalities, levels of interactivity, learner characteristics, and pedagogy based on a complex set of circumstances.”

While Dale’s Cone of Experience has not stood the test of time and the false percentages that often accompany it cannot be trusted, his core idea that educators should embrace different methods has been proven effective by these new, scientific studies. The complexities of interactive, multimodal learning can be overwhelming though, leaving educators with the tough task of bringing together different methods and different types of information to each lesson. Fortunately, with technology and new approaches to student projects, this task is still easier than ever before.

To see an example of a type of lesson that hits on all of Moreno and Mayer’s principles while helping students engage with new technologies, like VideoBlocks’ Digital Backpack, you can find our previous posts on digital storytelling and its effect on student engagement.