The Digital Literacy Divide in Our Classrooms 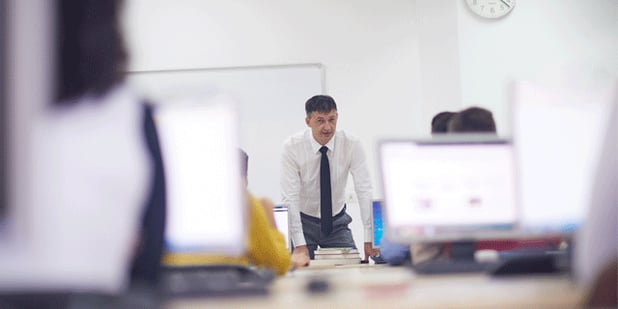 How does the media we use in our daily lives translate to digital literacy in the classroom, and why is there such a disconnect between curricular and extracurricular technology use for both students and educators? These are the questions we found ourselves asking after examining the results of our State of Digital Media in Higher Education Report.

As a number of publications reported last month, including Education Dive, Inside Higher Ed, and Campus Technology, one of the most surprising takeaways from our survey findings was the discrepancy between students’ and educators’ estimation of their digital media know-how.

On the whole, the data highlights a bias towards self-evaluation—with students and educators both more likely to rate their own literacy highly—and a cynicism towards the actual tech savvy of the other party. As such, when looked at broadly, the numbers suggest two very important yet conflicting conclusions: Either, as students and educators both, we are overestimating our own technology savvy, or—even worse—we are greatly underestimating each other’s digital literacy. What is perhaps most interesting about these findings is that the disparities between self-evaluation versus external are so closely mirrored between students and educators.

For either party, it is very tempting to dismiss these numbers based on our own biases and the stereotypes we hold. All too easily we might chalk up the date to self-absorbed students who are too complacent about their education to appreciate the resources their teachers are providing; or similarly, we might assume that the statistics were skewed by instructors who conflate digital literacy with a facility for digital research rather than their willingness to incorporate new media and relevant technologies into the classroom.

Yet, in a way, these extreme caricatures are at the core of the digital divide detailed by our survey findings. Why is it that both parties rated their own literacy so much higher than each other’s? While the majority of students and educators are at least moderately digitally literate—a conclusion based both on the data collected and given the evolving hypermediated reality of the 21st century—neither have nearly enough opportunities to employ their knowledge and skills in the classroom. As such, without the chance to demonstrate their literacy on a regular basis, it becomes all too easy to read into each other the stereotypes of either the lazy, ignorant student or the out-of-touch and out-of-date professor.

The Lack of Technology Usage

Students and educators now find themselves on either side of a growing technological rift, as our report suggests, and classrooms are the embattled territory that is directly contributing to this disconnect. We need only look at the comments and feedback we received with our survey to see that it is the lack of access or implementation that is hindering both educators and students in their digital educations—frustrations which we further unpacked in a two-part series last month.

When put in the broader context of our world’s current media landscape, from cloud computing to the instantaneous streaming and downloading of media all over the globe, it isn’t hard to understand why students and instructors struggle to demonstrate digital literacies in classrooms that often seem like technological dead zones. For some students, the only technology in their classes is the devices they bring with them. Similarly, for many instructors, it can be galling to realize that the media available to them are hardly different from the resources that their instructors had access to when they were students.

In an era of rapid technological progress—one that requires a steep learning curve whenever a new social media platform or essential smart device infiltrates our daily lives—it is utterly mindboggling that in even the most well-funded universities, a “smart classroom” can be defined as such based solely on whether or not it has internet connectivity.

At the end of the day, educators and students face the difficult question of whether or not digital literacy and proficiency in new technologies are priorities for their campuses. While many institutions do have varying mandates for digital curriculums or specialized programs, the lack of quality technological support across all departments and fields—not just for the innovations labs or specialized media programs—belies the fact that universal, campus-wide digital literacy is often not at the top of the funding list. Left without the opportunity to fully demonstrate or implement their technological savvy in productive and educational ways, it is hardly surprising that both students and educators tend to equally over- and underestimating their digital prowess.

How can universities get more relevant media resources on campus, bridging the gap between technologies used inside and outside of the classroom? One solution is our new U-Curate platform, in conjunction with our Digital Backpack. U-Curate is a centralized content management platform that allows faculty, students, and campus media designers to quickly and easily discover and download university-created footage.

We designed the platform to help universities more fully realize the potential and impact of their digital resources and assets, while also providing ease of use and access. Too often campuses lack the digital architecture to connect the dots between their already existent media assets and the offices, classrooms, and labs that would most benefit from that content. U-Curate answers this problem by surfacing and distributing university creative media through the platform’s powerful content organization system.

To learn more about bringing premium media resources to your classroom or campus, please visit U-Curate.com or Download the U-Curate Product Overview.

To learn more about the digital divide between students and educators and their frustrations with on-campus technologies, download our 2016 State of Digital Media in Higher Education Report.